I have a “Rule of Threes”. It’s probably from my softball days: three strikes, three outs, etc. Or maybe because I have three sisters. There’s also the Holy Trinity, which I learned about in Catholic elementary school. And, of course, I created the Third Ear Conflict Resolution process. Three is a number I notice. 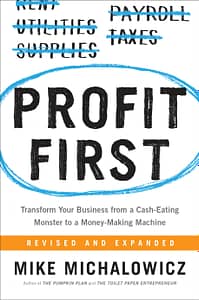 When three trusted people, groups, or sources recommend something to me within a few days, I typically check it out. That’s how I came to the Profit First book. Two colleagues recommended it to me. Then, the author, Mike Michalowicz, randomly started following me on Twitter!

My mother just died in February, so I am especially susceptible to “signs”. I told Michalowicz about my rule and ordered my copy from Amazon, where I also have a little book for sale.

I had been skeptical about the Profit First book. Was this another book about maximizing owner and shareholder value, stiffing vendors, and living like royalty, even when the business isn’t generating excess income? Do we really need anyone else teaching that?

I soon learned that no, this book is not what it might sound like. Don’t let the title fool you. It’s intentionally not called Profit Above All Else. It’s called Profit First to remind you where to focus. You have to work toward what keeps you in business first, yet Michalowicz also recognizes that you won’t see progress toward that goal if you don’t know what motivates you–and most other humans.

You’re not struggling with cash flow because you’re an unmotivated loser. You’re probably using a counterintuitive system and trying to make your brain work differently from its design. Profit First helps you learn how it works, use a system that exploits its dominant characteristics, and master your cash flow (if not also dominate your industry).

At the time of this writing, I am only on Chapter 8. But I only started the book three days ago! I was looking for some tweaks to improve the profitability and efficiencies of my nearly 15-year-old business, and I have not been disappointed. I relate well to Michalowicz’s analogies and case studies. I have been an athlete much of my life, and my business or my clients’ businesses often resemble those he discusses.

The chapter on implementing the system can be a little dry, but I recommend that you power through it and re-read it periodically. Your brain might resist it at first, yet you will probably see something new in it each time. This is one of those books you will want to keep in your office and refer back to at least annually, if not quarterly (especially while you’re building up your profit percentages).

I wish I had known to try this system years ago, but it’s perfect for me now, as I shift my focus from surviving to thriving and building a legacy that continues to empower people long after I’m gone.

Learn how to better resolve conflicts  Buy the book

Nance L. Schick, Esq. is a New York City attorney and mediator who focuses on keeping people out of court and building their conflict resolution skills, especially in business and employment disputes. Her holistic, integrative approach to conflict resolution draws from her experience as a crime victim, human resources supervisor, minor league sports agent, and United Nations representative. She is a 2001 graduate of the State University of New York Buffalo Law School trained in Alternative Dispute Resolution (ADR) by the Equal Employment Opportunity Commission (EEOC), Financial Industry Regulatory Authority (FINRA), and International Center for Ethno-Religious Mediation (ICERM). She is also creator of the Third Ear Conflict Resolution process, author of DIY Conflict Resolution: Seven Choices and Five Actions of a Master, and an award-winning entrepreneur, who has been acknowledged by Super Lawyers (ADR, 2018), the New York Economic Development Corporation/B-Labs (Finalist, Best for NYC 2015 & 2016), U.S. Chamber of Commerce (2015 Blue Ribbon Small Business), Enterprising Women Magazine (Honorable Mention, 2014 Woman of the Year awards), and Urban Rebound NY/Count Me In (Finalist, 2013 Pitch Competition).