Have you always wanted to write a book?

Probably. In middle school, I won a couple of Young Authors awards. I thought maybe I would be a writer when I grew up. It didn’t seem that hard because we had a project plan and teachers to keep us on task and on schedule.

In high school, I struggled more to complete writing assignments. I didn’t like my English teacher, and I was more interested in playing sports, hanging out with friends, and chasing boys.

By the time I reached college, I was only writing when required. I had grown to hate writing. I feared the red pen and criticism for my non-traditional views or curious nature. When I was hired as a freelancer writer for Hockey Ink!, I started to gain confidence and enjoy writing again. But I had forgotten my dream of writing books.

Then, I went to law school, where I was taught to write in a deliberate, persuasive style. I was inspired by the John Grisham novels I read on the bus to my summer internship, but I was careful not to let my creative writing get in the way of my legal career. I thought I had to choose.

It wasn’t until I sustained a head injury from a violent assault in 2014 that I decided I would take a chance and publicly share my writing. It was part of my healing, and as I wrote, my middle school dream resurfaced.

What are the pros and cons of self-publishing?

I self-published the first two editions of DIY Conflict Resolution. I worked with a hybrid publisher for the third edition. I’ve found that the pros and cons of self-publishing are often similar. For example: 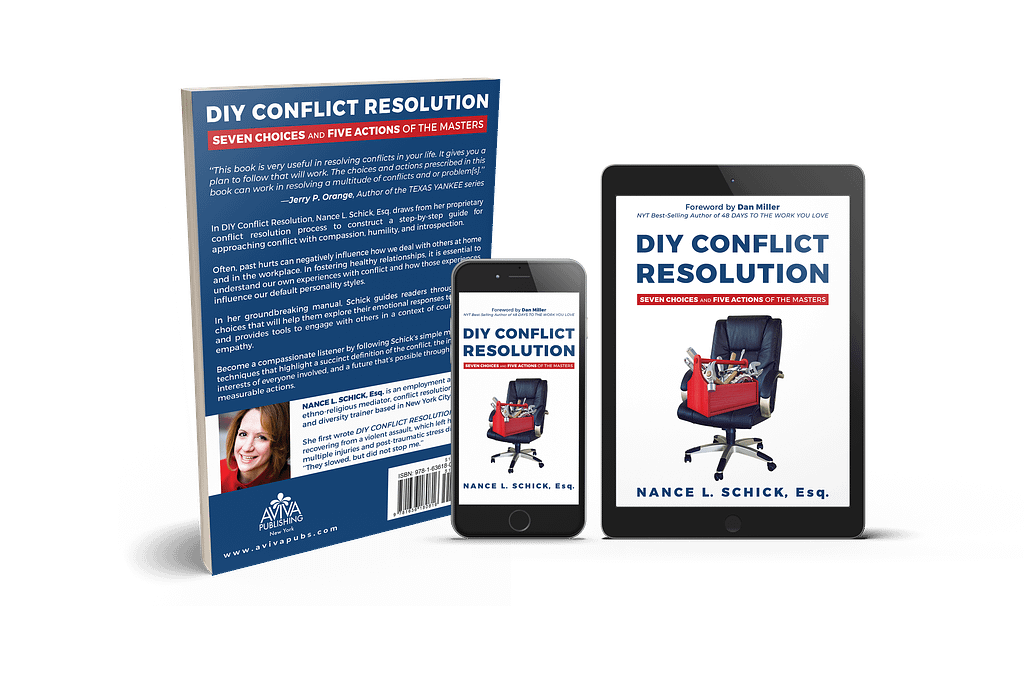 Should you seek a literary agent and go the traditional publishing route?

Depending on your goals, traditional publishing might not be the best route. I published the new edition of my book through Aviva Publishing (a hybrid publisher), after consulting Kary Oberbrunner, Balboa Press, and a few others. If your topic is law-related, you might also consider the ABA’s publishing arm.

Susan Friedmann, who founded Aviva Publishing, was in traditional publishing for many years and works with editors, cover designers, and interior layout designers who also come from that world. I also have a couple of good friends who are published authors through traditional publishers. Consistently, I have heard from them and others that even if you go with a literary agent and traditional publishing house, you will still need to do a lot of the legwork to get sell your book.

The three best things about self-publishing:

The three worst things about self-publishing:

It can feel like a job within a job at times, regardless of whether you work with a traditional publisher. The Nonfiction Authors Association has more information about this.

Nance L. Schick, Esq. is an attorney, mediator, conflict resolution coach, and diversity trainer based in New York City. Her goal is to keep employers out of court and build their conflict resolution skills so everyone has a better work experience. For more than 15 years, she has been negotiating penalty settlements for employers who unintentionally misclassify their workers. She is creator of the Third Ear Conflict Resolution process, author of DIY Conflict Resolution, and an award-winning entrepreneur acknowledged by Super Lawyers (ADR, 2018, 2019 & 2020), the New York Economic Development Corporation/B-Labs (Finalist, Best for NYC 2015 & 2016), U.S. Chamber of Commerce (2015 Blue Ribbon Small Business), Enterprising Women Magazine (Honorable Mention, 2014 Woman of the Year awards), and more.